Wraith (rāth) noun: a ghost or ghostlike image of someone, especially one seen after, or shortly before, their death

After living uneventfully for years in their historic home, the Lukens family have somehow awakened a ghostly presence. Who is this frightening spirit and why won’t it leave their 14 year-old daughter, Lucy, alone?

Everything changed when Dennis and Katie Lukens discovered they were pregnant again. Expecting in your 40’s is always high-risk and dangerous, so when the Lukens decide all options are on the table - including termination - the unexpected starts to happen. Sinister forces are now conspiring against the family. But is this eerie, wraith-like spirit actually trying to haunt them...or help them?

Wraith is available on all VOD platforms and Blu-ray/DVD May 8th.

From writer-director Michael O. Sajbel, Wraith explores the super-natural story of a family who invites evil into their home after they decide they may not go forward with an unplanned pregnancy. Sajbel, who previously directed One Night With the King based on the Biblical story of Esther was raised Catholic, wanted to present a story about protecting the most innocent of life. “Growing up in a household rooted in God was my biggest influence when I decided to become a filmmaker. On my application to film school at UCLA, when I filled out the forms there was one question in particular that asked, “Why do you want to go to our film school?” I thought I’d put God to the test and put down that I wanted to make films that honor Jesus Christ and spread the gospel throughout the world.” He was accepted which began his journey into filmmaking.


When it came to the sensitive subject about pro-life, he wanted a different take by creating a supernatural-thriller. Sajbel, who is a father of three adopted children, believes in the sanctity of all life. “I had not seen a film about this subject matter presented this way and wanted audiences to have fun with a little twist but to also incorporate a very important message about valuing all life no matter how complicated it can get. We see the Lukens couple struggle with this decision about whether they can afford another child and Mrs. Lukens age and how there could be medical complications and her overall concerns with having a baby at her age. I wanted to convey that no matter what – God provides and the value of protecting an innocent life. Wraith gives us a chance to present this important message in a very unique way.” 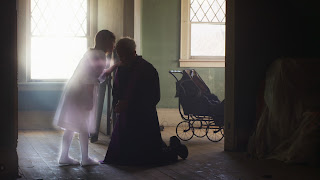